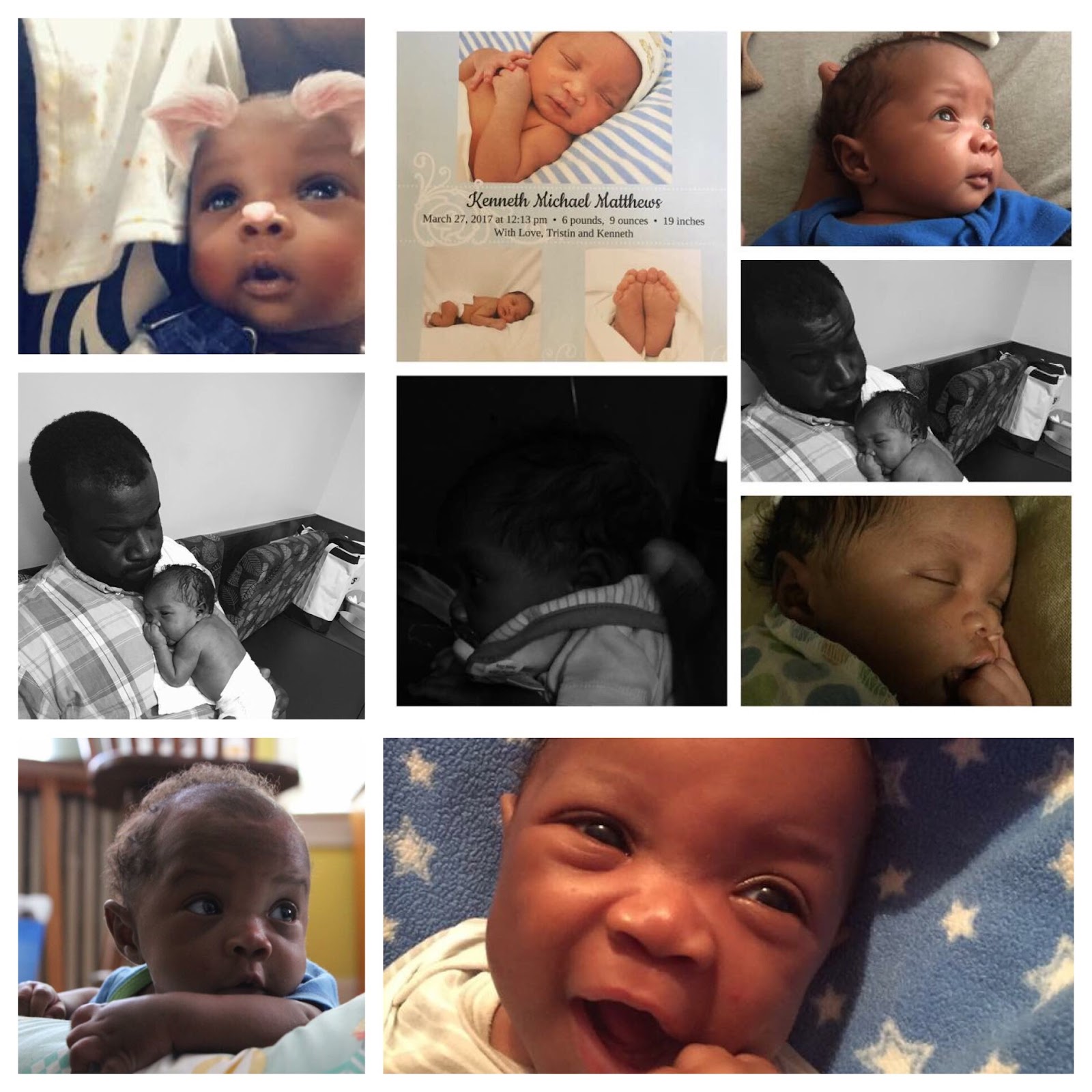 This piece features some thoughts from when my son was first born…. Each month for the next 12 months I will write some reflections on what it’s been like to be this little guys mom. This is just an introductory piece. The next piece will come out around my baby boy’s first birthday which is next month. Enjoy!!!!

At 3:30 in the morning, as I sit with my 2 month old in my arms playing as if it were 9 or 10 in the morning, I could be frustrated because I would be rather be in my bed with my husband catching some z’s. Oddly enough I’m not the least bit frustrated. I sit here in awe of this little person and I think wow “I have the responsibility of raising this little guy.” The next thought is coupled with a “Lord help me!!!” cry because I’m responsible for raising this little guy. Even with all the “fears” or uncertainty I may have as a parent, I praise the Lord because I’m not faced with the task of raising him alone. The Lord has blessed me with my husband who is by far the BEST at parenting and he has given me wisdom to do this task.

While I sit here holding my son, who is now drifting off to sleep, I’m reflecting just a bit. Let me take you on a journey just a bit. I can remember when I found out I was pregnant. It was August 1, 2016 at 2:30 pm, I had suspected that I was for a few weeks but couldn’t bring myself to take the test. My husband and I had been married for 3 months. I took the test right after we had finished lunch. The first initial emotion I felt was one of shock and a hint of fear. I mean 3 months in and baby number 1 on the way! Wow!!!! Within a week of finding out, I called and scheduled my first appointment. I was living life and letting it sit sink in that my husband and I were expecting our first child. Life was good until the day before my first appointment, I had my first scare. I was at work and something didn’t feel right. I went to the bathroom and all I could see was blood. I called my husband in freak out mode because I thought I was having a miscarriage. He calmed me down and told me to call the doctor. I called the doctor and she told me that for the moment I had to wait it out because my appointment was the next morning and if I was having a miscarriage there was nothing they could do. After talking to the doctor,  I talked to one of the managers explained my situation and went home. Can I say it was the LONGEST night of my life!!! The next morning at 10:30am my husband and I made our trip to the doctor’s office because of the situation my doctor scheduled my first sonogram and we heard the baby’s heartbeat for the first time!!!! On august 17 it was confirmed that we were going to be parents!!!! I was 7 weeks pregnant and would be due to have our baby on our anniversary.

As I sit here at 4:15am, my son is now sleeping. I reflect on my pregnancy as a whole. What can I say about the 39 weeks and 3 days I was pregnant? It was a stressful time. I was sick the ENTIRE time I was pregnant. My morning sickness was the worst I could not eat anything! I was also stressed out my entire pregnancy. My days consisted of long work shifts, dealing with the stressors of my job ( I worked in customer service), trying to maintain a healthy marriage, being the most hormonal woman ever (my poor husband) and being tired. My husband would often say you know “Tristin, you don’t know just how much I respect you, you are having a rough time but none would know it based upon looking at you!”  While physically I was going through some things with not being able to eat and all, every time I went to the doctor’s, my baby was healthy and I was healthy! The only thing my doctor harped on was me taking it easy.

Then came the day, my little man was born!!! The weeks leading up to him being born were hilarious compared to when I actually had him! You see week after week starting at 34 weeks I would go to the hospital because I was having contractions and week after week they would send me home!! However on the day that my son was born, my water broke while I was eating a fruit salad and my husband was in the bathroom. The things that happened next were funny. You see the times before, there was an urgency to get to the hospital. On this particular day, my husband and I were very calm. My husband showered, we got in the car , drove 45 minutes to the hospital ( the ride usually took about 15 minutes but there was rush hour traffic EVERYWHERE) and guess what not one contraction! Since my son was breach I was already going to have a cesarean but now I was having it a few days earlier. On March 27 in the afternoon my husband and I welcomed our son into this world! In that moment I knew that anything I felt or would feel was worth it!!

At 4:47am in the morning, my son is in his bed, I am still awake writing away! Still reflecting… I can remember when my husband and I made the decision that I would stay home. I never knew I would struggle with our decision the way I have struggled. It’s something I desired to do for the sake of my family but there were thoughts that I needed and still need to get over. For weeks I’ve felt like people were judging us for the decision we had made and that I needed to do more. During this time, I’ve also realized how much of my identity is wrapped up in what I can do or what I have accomplished. I struggled with this notion that I was somehow losing a piece of me because I was now a wife and mommy! It wasn’t until a few weeks ago that I realized that being a wife and new mommy is just an added aspect of who I am as a person. My husband is always telling me just because I’m a wife and mother doesn’t mean I stopped being me! It just means I have new areas of life on which to place my focus. He also encouraged me to get back to something I was doing long before I was married and a mom- WRITING!

At 5:02am I’m still awake!!! But my heart is full of praise to Jesus Christ for giving me this wonderful task. My prayer is that I would be the wife and mother that honors Him! I pray that I will use all of my gifts,  talents, and abilities to bring honor to the Lord. I pray that I will do this role with grace and humility and will continue to learn!!!

View all posts by jilatia